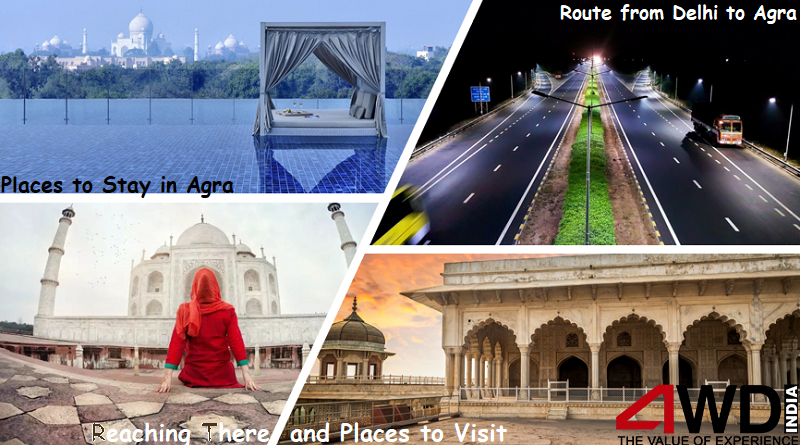 By the way, as you know that the road trip in India is an enthralling experience for the entire family. Basically, when you start your trip to Agra then first you should reach the Delhi, the capital city of India And as you listened about this city that it is the “Dil vaalon ki Dilli” so, here you get the chance to see the various and extraordinary things that are most popular amongst us. At present, Agra is awesomely popular as the city of Shah Jahan’s marvelous structure which is the Taj Mahal and is popular as the Seven Wonders of the World that are also remarked as the UNESCO Heritage site. I am sharing my experience in Taj city from the capital city of India with Delhi to Agra by car that is very comfortable for me to do anything without any worry.

If you want to feel the aura of the Mughal era, then grab a car, munchies, good company with Delhi to Agra by car tour package. Then what is best than this a good weekend and to release from the city of life!

The best time to visit in the city of Taj is from October to March. So, it is the time when the heat has receded and is the start of winter month when the weather is enjoyably cold preparing it awesome for sightseeing and it is terribly hot from the month of April to July.

Places to Eat in Agra

The mouth-watering cuisines of this city are brought by the way of Mughals ate that is meat with amusing curries with true-to-Indian basis interests. Here, you can also take the enjoy of Parathas which are also originated from this city. By the way, most of the restaurants provide the rich curries mouth-watering kebabs with parathas.

Here, in the city of Taj City, you can visit its popular restaurants to taste the various cuisines like as Esphahan (popular restaurant of Taj City and situated inside the amazing Oberoi Amarvilas hotel & is famous for its Kerala shrimp curry and North Indian tandoor dishes), Shankar Ji (it is a local Dhaba to get an amazing Dhaba experience), Saniya Palace (popular for having the best view of Taj Mahal and is a rooftop restaurant).

Route from Delhi to Agra

The distance between Delhi to Agra is just 233kms that takes hardly three to four hours to reach there and also based on the traffic for it taking the time and lastly reached there at just approximate 4 hours through Yamuna Expressway, if you left Delhi in the morning around 9 am or 10 am. And if you left Delhi in the morning at 6 am then it can be taking approximate three hours because at that time the traffic will be less and the road is easy and smooth. There is a lot of routes from Delhi to Taj City although, the best and fastest route is via the Yamuna Expressway that is beginning from Noida to Agra. And the patrolling Bike on the highway and the signboards are very helpful while driving.

What to Eat and Stopovers

On your way to the Taj City, you will be seeing a lot of local and imaginary dhabas like as Amrik Sukhdev Dhaba, Gulshan ka Dhaba, and Pahalwan Dhaba at Murthal. And mostly dhabas have the air-conditioned and comfortable seating with clean washrooms and you can also see the Mc Donalds near Mathura.

Reaching There and Places to Visit

After reaching the Taj city then you can get the chance to explore the Taj Mahal which is the main reason to visit this city. And there are also located many other places that are also unique.

Some of the main attractions of this city are Agra Fort (Historical Fort), Tomb of Itmad-ud-Daulah (explained the Baby Taj & Jewel Box), Meena Bazaar (popular for ladies shop handicrafts), and so on. Places to Visit near Delhi in December