The most well-known tour in India is the luxurious golden triangle India tour packages. A typical Golden Triangle Luxury tour includes New Delhi, Agra, and Jaipur, three heritage cities. The itinerary is perfect for first-time visitors to India who want to see the Taj Mahal, Fatehpur Sikri, the City Palace of Jaipur, Qutub Minar of New Delhi, and other lesser-known historical sites. Additionally, you have the opportunity to stay in opulent palaces that have been transformed into five-star hotels.

The tour called “Experience Luxury at the Oberoi” lasts for four nights and five days. This trip offers the chance to visit Ranthambore and Udaipur in addition to the most well-known destinations of the Golden Triangle tour: Delhi, Agra, and Jaipur. The world-famous Delhi Agra Jaipur Tour is also included in this itinerary.

You don’t need to do anything just drop a message on WhatsApp of Four Wheel Drive India Pvt. Ltd. we will plan your holiday, also you can do customization as per your choice.

How to Plan Golden Triangle India Tour in Luxury Way?

Pickup and transfer to the Oberoi Hotel from Delhi’s international airport. Check-in and daily recap. Prepare to visit India Gate and Humayun’s Tomb after lunch. Back to the hotel later. Spend the night at The Oberoi hotel.

Pick up from your hotel in Delhi, then start your guided city tour. Delhi, which is thought to be about 5000 years old, has a rich past.

Visit the Jama Masjid, which is India’s largest mosque. The mosque was constructed with red sandstone in the traditional Mughal style, and it has enough space to hold up to 50,000 people at once.

Our next stop will be Raj Ghat. It is a monument to Mahatma Gandhi, the nation’s father. The monument has great religious significance and is a notable piece of historical architecture.

We’ll then have a tour of several locations in Old Delhi. Start with India’s tallest minaret, Qutab Minar. The Minaret has significant historical value and is a superb example of suburban architecture.

After that, head to HumayunTomb, the monument to the second Mughal Emperor. The mausoleum has also been designated as a UNESCO World Heritage Site because of its historical significance and stunning architecture.

It’s time to see the Taj Mahal at sunrise, the most breathtaking sight in the entire world, before your journey in Agra comes to an end. Arrive at the Taj Mahal early in the morning, before sunrise, and take in the sun’s first rays as they hit the pristinely white structure. The tranquil backdrop, the refreshing winds, and the entire scene transport you to the time when this memorial was erected out of unadulterated love.

Also Read: What Are the Main Attractions of Jaipur to Visit in a Day?

As a memorial to his wife Mumtaj Mahal, who passed away while giving birth to their fourteenth child, Mughal Emperor Shah Jahan erected the Taj Mahal. The emperor made the decision to construct something that would complement his wife’s beauty. For the next 22 years, 25,000 employees labored nonstop to build something incredible and unmatched. The Taj Mahal received numerous recognitions for its alluring beauty, the emperor’s devotion, and its historical significance, including the titles of Symbol of Love, Seventh Wonder of the World, and UNESCO World Heritage Site.

Breakfast at the hotel is now served. Check out of the hotel thereafter, and then go see the Agra fort.

The Agra Fort, also known as the “Red Fort of Agra,” has been listed as a UNESCO World Heritage Site. Given that several Mughal emperors, including Babur, Humayun, Akbar, and a few others, governed from this fort, its planning and construction could serve as a representative example of Mughal architecture. The fort has an important place in Indian history. This fort, which formerly served as the Mughal Empire’s administrative center, was eventually turned into a museum. It has a lot of the former monarchs’ possessions. Later proceed to Jaipur through Fatehpur Sikri via Fatehpur Sikri.

Also Read: A Golden Triangle Trip to Know about the Cultural History of India

Another lovely town founded by the Mughals is Fatehpur Sikri. The town has everything needed to be a world-class city because it had been built with the intention of serving as the Empire’s capital. Many monuments, markets, structures, and other things were built. However, a terrible drought struck the town, forcing the rulers to relocate their capital to Agra and the population to leave. You might still be able to see the remains of those fascinating structures today. Fatehpur Sikri is sometimes referred to as a Ghost Town since it is thought that the souls of individuals who passed away in the town still wander the streets.

Drive to Jaipur later. Arrive in Jaipur and check into the hotel for a lengthy stay. Inn at Hotel Oberoi Rajvillas for the night.

Hotel breakfast is available. Begin your Jaipur tour with a Jaipur sightseeing tour package later on by going to Amber Fort. It is one of the most renowned forts with a mixture of Muslim and Hindu elements. This fort has four main courtyards: the Women’s Quarters, the Hall of Public (Diwan-i-Am), the Hall of Victory (Jai Mandir), and the Hall of Joy (SukhNiwas) (The Zenana). The Sheesh Mahal in Amber Fort is another draw (Mirror Palace).

One of the most formidable forts in ancient India, Amber Fort is one of the very few forts that have never been conquered by a monarch.

Continue on to City Palace. This palace, like other forts and palaces in Jaipur, combines Mughal and Rajasthani architectural styles. Between 1729 and 1732, Prince Sawai Jai Singh II started the construction of this palace. The prince’s residence was City Palace.

Visit Jantar Mantar, the biggest solar observatory in the world, afterward. The observatory has a few tools for calculating the locations of the stars. The largest instrument of its sort in the world is called Sun Dial.

Visit Hawa Mahal, also known as the Palace of Winds, after that. The castle is designed to resemble Lord Krishna’s crown. The royal ladies used to sit in this palace during Rajasthan’s sweltering summers to observe events in the town. This palace is often known as Hawa Mahal because it has 953 windows that let pleasant breezes pass by.

Return to your hotel later to spend the night.

Your luxurious Golden Triangle tour comes to a close as your car heads toward Delhi after a delectable breakfast.

We’ll make a pit stop for a great lunch in the middle. Once you arrive in Delhi, a transfer to take you to the airport will be arranged for you.

There is no better India Tour package if luxury is your passion and making the most of a trip is your goal. In Indian tourism, the locations included are known as the “luxury golden triangle,” and with good reason. The tour transports guests back to the heyday of the monarchy, complete with full-service personalization fit for royalty and uncompromised excellence. You learn to love and live better while touring Agra, Jaipur, and Delhi, the heart, face, and intellect of India. You also, of course, gain a new life.

Also Read: Taste the Cuisines at North India during Your Golden Triangle 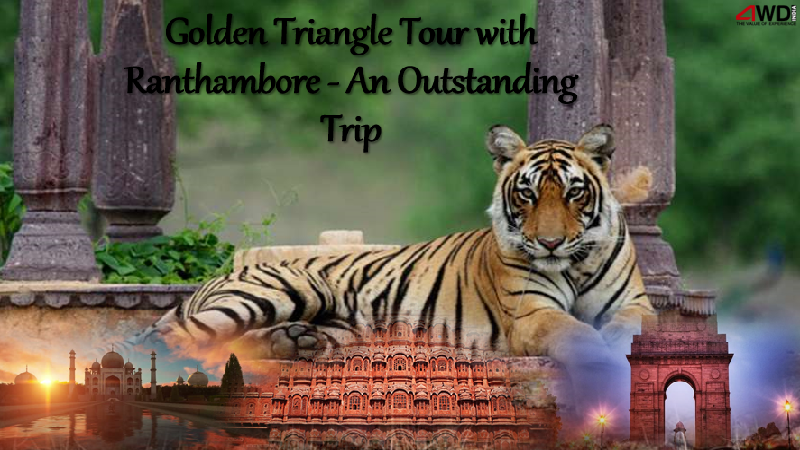